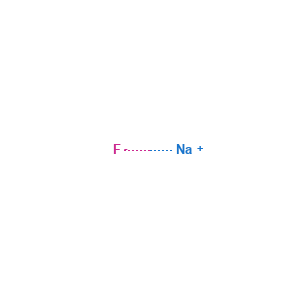 Personal protection: particulate filter respirator adapted to the airborne concentration of the substance. Sweep spilled substance into covered containers. Carefully collect remainder. Then store and dispose of according to local regulations.

Separated from acids and food and feedstuffs.

Use ventilation (not if powder), local exhaust or breathing protection.

The substance is irritating to the eyes, skin and respiratory tract. Ingestion could cause hypocalcaemia and hypokalaemia. This may result in central nervous system disorders and cardiac disorders.

The substance may have effects on the bones and teeth. This may result in fluorosis.

Evaporation at 20°C is negligible; a harmful concentration of airborne particles can, however, be reached quickly on spraying or when dispersed, especially if powdered.

Specific treatment is necessary in case of poisoning with this substance; the appropriate means with instructions must be available.