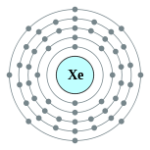 It is a chemical element with the symbol Xe and atomic number 54.
It is a colorless, dense, odorless noble gas found in Earth’s atmosphere in trace amounts.
Although generally unreactive, Element Xenon can undergo a few chemical reactions such as the formation of xenon hexafluoroplatinate, the first noble gas compound to be synthesized
Xenon is used in flash lamps and arc lamps, and as a general anesthetic. The first excimer laser design used a xenon dimer molecule (Xe2) as the lasing medium,and the earliest laser designs used xenon flash lamps as pumps. Xenon is used to search for hypothetical weakly interacting massive particles and as the propellant for ion thrusters in spacecraft.

Of the nine stable Xenon isotopes, several are used in various medical and scientific applications. Xe-124 is used in the production of two radioisotopes: I-123 and I-125. I-123 is used extensively in diagnostic procedures while I-125 is used in the treatment of prostate cancer. Hyperpolarized Xe-129 is used in the magnetic resonance imaging of gas flows in the lungs. Xe-136 has been proposed as a detector for neutrinoless double Beta decay research. Xe-126 can be used as a target for the production of radioactive Ba-128.