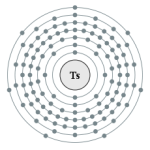 The discovery of tennessine was officially announced in Dubna, Russia, by a Russian–American collaboration in April 2010, which makes it the most recently discovered element as of 2019.
Tennessine is a synthetic chemical element with the symbol Ts and atomic number 117. It is the second-heaviest known element and the penultimate element of the 7th period of the periodic table.
Tennessine is expected to be a member of group 17 in the periodic table, below the five halogens; fluorine, chlorine, bromine, iodine, and astatine

All isotopes with an atomic number above 101 undergo radioactive decay with half-lives of less than 30 hours. No elements with atomic numbers above 82 (after lead) have stable isotopes.