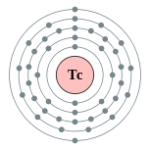 Technetium (43Tc) is the first of the two elements lighter than bismuth that have no stable isotopes; the other such element is promethium.