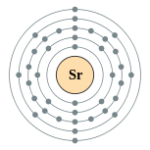 It is an element with atomic symbol Sr, atomic number 38, and atomic weight 87.62.
Strontium atom is an alkaline earth metal atom.
Element Strontium is a naturally occurring element found in rocks, soil, dust, coal, and oil. Naturally occurring strontium is not radioactive and is either referred to as stable strontium or strontium.
Element Strontium in the environment exists in four stable isotopes, 84Sr (read as strontium eighty-four), 86Sr, 87Sr, 88Sr. Strontium compounds are used in making ceramics and glass products, pyrotechnics, paint pigments, fluorescent lights, and medicines.
Strontium can also exist as several radioactive isotopes; the most common is 90Sr. 90Sr is formed in nuclear reactors or during the explosion of nuclear weapons.
Radioactive strontium generates beta particles as it decays. One of the radioactive properties of strontium is half-life, or the time it takes for half of the isotope to give off its radiation and change into another substance. The half-life of 90Sr is 29 years.

Natural strontium is a mixture of four stable isotopes: 84Sr, 86Sr, 87Sr, and 88Sr.
Their abundance increases with increasing mass number and the heaviest, 88Sr, makes up about 82.6% of all natural strontium, though the abundance varies due to the production of radiogenic 87Sr as the daughter of long-lived beta-decaying 87Rb