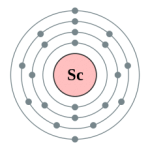 In nature, scandium is found exclusively as the isotope 45Sc, which has a nuclear spin of 7/2; this is its only stable isotope.
Thirteen radioisotopes have been characterized with the most stable being 46Sc, which has a half-life of 83.8 days; 47Sc, 3.35 days; the positron emitter 44Sc, 4 h; and 48Sc, 43.7 hours.
All of the remaining radioactive isotopes have half-lives less than 4 hours, and the majority of these have half-lives less than 2 minutes. This element also has five nuclear isomers, with the most stable being 44mSc (t1/2 = 58.6 h).