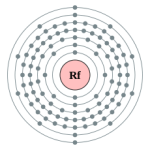 It is a synthetic chemical element with the symbol Rf and atomic number 104, named after New Zealand physicist Ernest Rutherford
In the periodic table of the elements, Element Rutherfordium is a d-block element and the second of the fourth-row transition elements. It is a member of the 7th period and belongs to the group 4 elements
The chemical properties of rutherfordium are characterized only partly. They compare well with the chemistry of the other group 4 elements, even though some calculations had indicated that the element might show significantly different properties due to relativistic effects.

Rutherfordium has no stable or naturally occurring isotopes. Several radioactive isotopes have been synthesized in the laboratory, either by fusing two atoms or by observing the decay of heavier elements. Sixteen different isotopes have been reported with atomic masses from 253 to 270 (with the exceptions of 264 and 269). Most of these decay predominantly through spontaneous fission pathways