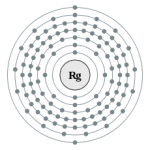 Roentgenium was first created in 1994 by the GSI Helmholtz Centre for Heavy Ion Research near Darmstadt, Germany. It is named after the physicist Wilhelm Röntgen (also spelled Roentgen), who discovered X-rays.
Roentgenium is a chemical element with the symbol Rg and atomic number 111
In the periodic table, it is a d-block transactinide element. It is a member of the 7th period and is placed in the group 11 elements, although no chemical experiments have been carried out to confirm that it behaves as the heavier homologue to gold in group 11 as the ninth member of the 6d series of transition metals.
Roentgenium is calculated to have similar properties to its lighter homologues, copper, silver, and gold, although it may show some differences from them.