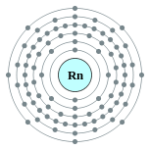 It is a chemical element with the symbol Rn and atomic number 86.
Element Radon is formed from the radioactive decay of uranium. Uranium is found in small amounts in most rocks and soil. It slowly breaks down to other products such as radium, which breaks down to radon. Radon also undergoes radioactive decay.
Radon is a colorless, odorless, and tasteless gas and therefore is not detectable by human senses alone.
It occurs naturally in minute quantities as an intermediate step in the normal radioactive decay chains through which thorium and uranium slowly decay into lead and various other short-lived radioactive elements;
Radon is no longer used in the treatment of various diseases including cancer, arthritis, diabetes, and ulcers. Radon is used to predict earthquakes, in the study of atmospheric transport, and in exploration for petroleum and uranium.

Radon has no stable isotopes. Thirty-nine radioactive isotopes have been characterized, with atomic masses ranging from 193 to 231