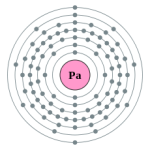 Protactinium (formerly protoactinium) is a chemical element with the symbol Pa and atomic number 91.
Protactinium was first identified in 1913 by Kasimir Fajans and Oswald Helmuth Göhring and named brevium because of the short half-life of the specific isotope studied, i.e. protactinium-234.
It is a dense, silvery-gray actinide metal which readily reacts with oxygen, water vapor and inorganic acids.
It forms various chemical compounds in which protactinium is usually present in the oxidation state +5, but it can also assume +4 and even +3 or +2 states.