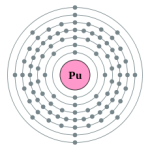 It is an actinide metal of silvery-gray appearance that tarnishes when exposed to air, and forms a dull coating when oxidized
Plutonium is a radioactive chemical element with the symbol Pu and atomic number 94.
The element normally exhibits six allotropes and four oxidation states. It reacts with carbon, halogens, nitrogen, silicon, and hydrogen
Plutonium, like most metals, has a bright silvery appearance at first, much like nickel, but it oxidizes very quickly to a dull gray, although yellow and olive green are also reported