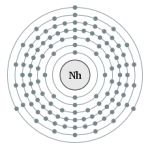 Nihonium was first reported to have been created in 2003 by a Russian–American collaboration at the Joint Institute for Nuclear Research (JINR) in Dubna, Russia, and in 2004 by a team of Japanese scientists at Riken in Wakō, Japan.
The confirmation of their claims in the ensuing years involved independent teams of scientists working in the United States, Germany, Sweden, and China, as well as the original claimants in Russia and Japan.
It is extremely radioactive; its most stable known isotope, nihonium-286, has a half-life of about 10 seconds.
In the periodic table, nihonium is a transactinide element in the p-block. It is a member of period 7 and group 13 (boron group).
Nihonium is a synthetic chemical element with the symbol Nh and atomic number 113

Nihonium has no stable or naturally occurring isotopes.
Several radioactive isotopes have been synthesised in the laboratory, either by fusing two atoms or by observing the decay of heavier elements.