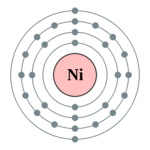 It is a chemical element with the symbol Ni and atomic number 28.
It is a silvery-white lustrous metal with a slight golden tinge. Nickel belongs to the transition metals and is hard and ductile.
Pure nickel, powdered to maximize the reactive surface area, shows a significant chemical activity, but larger pieces are slow to react with air under standard conditions because an oxide layer forms on the surface and prevents further corrosion (passivation).
Even so, pure native nickel is found in Earth’s crust only in tiny amounts, usually in ultramafic rocks, and in the interiors of larger nickel–iron meteorites that were not exposed to oxygen when outside Earth’s atmosphere.
Nickel is one of four elements (the others are iron, cobalt, and gadolinium) that are ferromagnetic at approximately room temperature. Alnico permanent magnets based partly on Element Nickel are of intermediate strength between iron-based permanent magnets and rare-earth magnets.

Naturally occurring nickel is composed of five stable isotopes; 58Ni, 60Ni, 61Ni, 62Ni and 64Ni, with 58 Ni being the most abundant (68.077% natural abundance). Isotopes heavier than 62 Ni cannot be formed by nuclear fusion without losing energy.