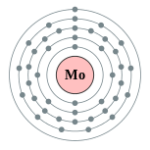 It is an element with atomic symbol Mo, atomic number 42, and atomic weight 95.94.
Molybdenum is a transition element and is present in several human enzymes, such as xanthine and sulfite oxidases, and in enzyme cofactors in oxidative reduction reactions.
Molybdenum is found in many foods and deficiencies are rare. Molybdenum deficiency has been described in animals and rare cases have been reported in patients on total parenteral nutrition, clinical signs being mental disturbances and coma accompanied by hypouricemia and hypermethioninemia.
Molybdenum is relatively nontoxic, although high levels may be a cause of high uric acid levels and an increased incidence of gout. Liver toxicity from molybdenum has not been described.
Molybdenum atom is a chromium group element atom. It has a role as a micronutrient.

There are 35 known isotopes of molybdenum, ranging in atomic mass from 83 to 117, as well as four metastable nuclear isomers.
Seven isotopes occur naturally, with atomic masses of 92, 94, 95, 96, 97, 98, and 100. Of these naturally occurring isotopes, only molybdenum-100 is unstable.