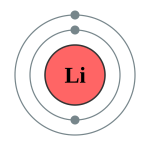 It is a chemical element with symbol Li and atomic number 3. Classified as an alkali metal, lithium is a solid at room temperature.
Lithium and its compounds have several industrial applications, including heat-resistant glass and ceramics, lithium grease lubricants, flux additives for iron, steel and aluminium production, lithium batteries, and lithium-ion batteries. These uses consume more than three quarters of lithium production.
Lithium element is present in biological systems in trace amounts; its functions are uncertain. Lithium salts have proven to be useful as a mood-stabilizing drug in the treatment of bipolar disorder in humans.
It does not occur freely in nature; combined, it is found in small units in nearly all igneous rocks and in many mineral springs. Lepidolite, spodumene, petalite, and amblygonite are the more important minerals containing it.
Lithium element is presently being recovered from brines of Searles Lake, in California, and from those in Nevada. Large deposits of quadramene are found in North Carolina. The metal is produced electrolytically from the fused chloride. Lithium is silvery in appearance, much like Na, K, and other members of the alkali metal series. It reacts with water, but not as vigorously as sodium. Lithium imparts a beautiful crimson color to a flame, but when the metal burns strongly, the flame is a dazzling white.

All of the remaining isotopes of lithium have half-lives that are shorter than 10 nanoseconds. The shortest-lived known isotope of lithium is lithium-4, which decays by proton emission with a half-life of about 9.1×10−23 seconds, although the half-life of lithium-3 is yet to be determined, and is likely to be much shorter, like helium-2 (diproton) which undergoes proton decay within 10−9 s.
Naturally occurring lithium (3Li) is composed of two stable isotopes, lithium-6 and lithium-7, with the latter being far more abundant: about 92.5 percent of the atoms.
Both of the natural isotopes have an unexpectedly low nuclear binding energy per nucleon (~5.3 MeV) when compared with the adjacent lighter and heavier elements, helium (~7.1 MeV) and beryllium (~6.5 MeV). The longest-lived radioisotope of lithium is lithium-8, which has a half-life of just 839.4 milliseconds. Lithium-9 has a half-life of 178.3 milliseconds, and lithium-11 has a half-life of about 8.75 milliseconds.
Lithium-7 and lithium-6 are two of the primordial nuclides that were produced in the Big Bang, with lithium-7 to be 10−9 of all primordial nuclides and amount of lithium-6 around 10−13.
A small percentage of lithium-6 is also known to be produced by nuclear reactions in certain stars. The isotopes of lithium separate somewhat during a variety of geological processes, including mineral formation (chemical precipitation and ion exchange). Lithium ions replace magnesium or iron in certain octahedral locations in clays, and lithium-6 is sometimes preferred over lithium-7. This results in some enrichment of lithium-7 in geological processes.
Lithium-6 is an important isotope in nuclear physics because when it is bombarded with neutrons, tritium is produced.