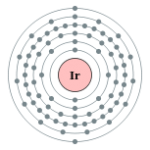 It is an element with atomic symbol Ir, atomic number 77, and atomic weight 192.217.
A very hard, brittle, silvery-white transition metal of the platinum group, iridium is the second-densest metal (after osmium) with a density of 22.56 g/cm³ as defined by experimental X-ray crystallography.
The most important iridium compounds in use are the salts and acids it forms with chlorine, though iridium also forms a number of organometallic compounds used in industrial catalysis, and in research.
Iridium metal is employed when high corrosion resistance at high temperatures is needed, as in high-performance spark plugs, crucibles for recrystallization of semiconductors at high temperatures, and electrodes for the production of chlorine in the chloralkali process. Element Iridium radioisotopes are used in some radioisotope thermoelectric generators.

Iridium has two naturally occurring, stable isotopes, 191Ir and 193Ir, with natural abundances of 37.3% and 62.7%, respectively.
At least 37 radioisotopes have also been synthesized, ranging in mass number from 164 to 202. 192Ir, which falls between the two stable isotopes, is the most stable radioisotope, with a half-life of 73.827 days.