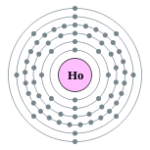 Natural holmium contains one stable isotope, holmium-165. Some synthetic radioactive isotopes are known; the most stable one is holmium-163, with a half-life of 4570 years.