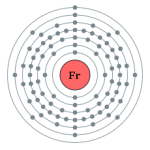 Element Francium atom is an alkali metal atom.
A radioactive alkali metal with the atomic symbol Fr, and atomic number 87. The mass numbers of known isotopes are 204-213, 217-224. Its valence is +1.
Prior to its discovery, it was referred to as eka-caesium. It is extremely radioactive; its most stable isotope, francium-223 (originally called actinium K after the natural decay chain it appears in), has a half-life of only 22 minutes.
Bulk francium has never been viewed. Because of the general appearance of the other elements in its periodic table column, it is assumed that francium would appear as a highly reactive metal, if enough could be collected together to be viewed as a bulk solid or liquid. Obtaining such a sample is highly improbable, since the extreme heat of decay caused by its short half-life would immediately vaporize any viewable quantity of the element.

There are 34 known isotopes of francium ranging in atomic mass from 199 to 232.
Francium has seven metastable nuclear isomers.
Francium-223 and francium-221 are the only isotopes that occur in nature, though the former is far more common.