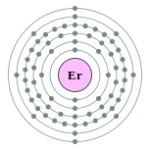 Erbium has six stable isotopes but only Er-168 appears to have a well established application. Er-168 is used for the production of Er-169 which is used in form of citrate for the treatment of rheumatoid arthritis.