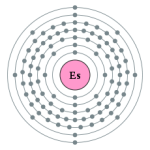 Einsteinium was discovered as a component of the debris of the first hydrogen bomb explosion in 1952, and named after Albert Einstein.
Its most common isotope einsteinium-253 (half-life 20.47 days) is produced artificially from decay of californium-253 in a few dedicated high-power nuclear reactors with a total yield on the order of one milligram per year.
Einsteinium is a synthetic element with the symbol Es and atomic number 99. As a member of the actinide series, it is the seventh transuranic element.