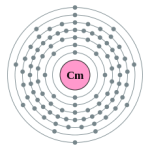 This element of the actinide series was named after Marie and Pierre Curie – both were known for their research on radioactivity.
Curium was first intentionally produced and identified in July 1944 by the group of Glenn T. Seaborg at the University of California, Berkeley.
Curium is a transuranic radioactive chemical element with the symbol Cm and atomic number 96.
A synthetic, radioactive element, curium is a hard, dense metal with a silvery-white appearance and physical and chemical properties resembling those of gadolinium.
Its melting point of 1340 °C is significantly higher than that of the previous transuranic elements neptunium (637 °C), plutonium (639 °C) and americium (1173 °C)

About 19 radioisotopes and 7 nuclear isomers between 233Cm and 251Cm are known for curium, none of which are stable.