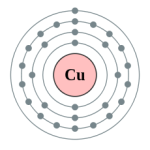 Element Copper is a chemical element with the symbol Cu (from Latin: cuprum) and atomic number 29.
It is a soft, malleable, and ductile metal with very high thermal and electrical conductivity. A freshly exposed surface of pure copper has a pinkish-orange color.
Copper is used as a conductor of heat and electricity, as a building material, and as a constituent of various metal alloys, such as sterling silver used in jewelry, cupronickel used to make marine hardware and coins, and constantan used in strain gauges and thermocouples for temperature measurement.

Both isotopes of Copper, Cu-63 and Cu-65, are used to study copper metabolism and gastrointestinal diseases. Cu-63 is used for production of medical radioisotope Zn-62 and can also be used for the production of Cu-64 which is used in cancer diagnosis and treatment. Cu-65 has also been proposed as a precursor for the (cyclotron) production of Cu-64.