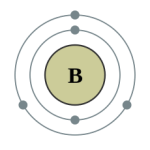 It is an element with atomic symbol B, atomic number 5, and atomic weight 11.
Boron atom is a nonmetal atom, a boron group element atom and a metalloid atom. It has a role as a micronutrient.
Boron is a compound that occurs in nature.
It is often found combined with other substances to form compounds called borates.
Common borate compounds include boric acid, salts of borates, and boron oxide.
Borates are used mostly to produce glass. They are also used in fire retardants, leather tanning industries, cosmetics, photographic materials, soaps and cleaners, and for high-energy fuel. Some pesticides used for cockroach control and some wood preservatives also contain borates.

Both isotopes of Boron, B-10 and B-11, are used extensively in the nuclear industry.
B-10 is used in the form of boric acid as a chemical shim in pressurized water reactors while in the form of sodium pentaborate it is used for standby liquid control systems in boiling water reactors. B-11 can be used as a neutron reflector.
Outside the nuclear industry both isotopes are used as food label to study boron metabolism.
B-10 is also used in so-called boron neutron capture therapy (BNCT). Both B-10 and B-11 can be used for the production of two radioisotopes: C-11 and N-13.