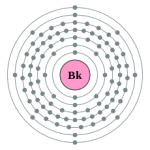 It is a member of the actinide and transuranium element series. It is named after the city of Berkeley, California, the location of the Lawrence Berkeley National Laboratory (then the University of California Radiation Laboratory) where it was discovered in December 1949.
Berkelium was the fifth transuranium element discovered after neptunium, plutonium, curium and americium.
Berkelium is a transuranic radioactive chemical element with the symbol Bk and atomic number 97.
Berkelium is a soft, silvery-white, radioactive actinide metal. In the periodic table, it is located to the right of the actinide curium, to the left of the actinide californium and below the lanthanide terbium with which it shares many similarities in physical and chemical properties