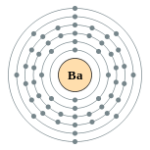 It is an element with atomic symbol Ba, atomic number 56, and atomic weight 137.
Barium(0) is an elemental barium.
Barium is a silvery-white metal which exists in nature only in ores containing mixtures of elements.
Element Barium combines with other chemicals such as sulfur or carbon and oxygen to form barium compounds.
Barium compounds are used by the oil and gas industries to make drilling muds. Drilling muds make it easier to drill through rock by keeping the drill bit lubricated.
They are also used to make paint, bricks, ceramics, glass, and rubber. Barium sulfate is sometimes used by doctors to perform medical tests and to take x-rays of the gastrointestinal tract.

Barium found in the Earth’s crust is a mixture of seven primordial nuclides, barium-130, 132, and 134 through 138.
Barium-130 undergoes very slow radioactive decay to xenon-130 by double beta plus decay, and barium-132 theoretically decays similarly to xenon-132, with half-lives a thousand times greater than the age of the Universe.