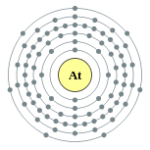 It is a radioactive chemical element with the symbol At and atomic number 85.
Element Astatine is the rarest naturally occurring element in the Earth’s crust, occurring only as the decay product of various heavier elements.
All of astatine’s isotopes are short-lived; the most stable is astatine-210, with a half-life of 8.1 hours. A sample of the pure element has never been assembled, because any macroscopic specimen would be immediately vaporized by the heat of its own radioactivity.
Most of the physical properties of astatine have been estimated (by interpolation or extrapolation), using theoretically or empirically derived methods.

There are 39 known isotopes of astatine, with atomic masses (mass numbers) of 191–229. Theoretical modeling suggests that 37 more isotopes could exist. No stable or long-lived astatine isotope has been observed, nor is one expected to exist.