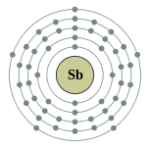 It is a chemical element with the symbol Sb (from Latin: stibium) and atomic number 51.
A lustrous gray metalloid, Element Antimony is found in nature mainly as the sulfide mineral stibnite (Sb2S3).
Antimony compounds have been known since ancient times and were powdered for use as medicine and cosmetics, often known by the Arabic name, kohl.Metallic antimony was also known, but it was erroneously identified as lead upon its discovery.
Antimony is a member of group 15 of the periodic table, one of the elements called pnictogens, and has an electronegativity of 2.05. In accordance with periodic trends, it is more electronegative than tin or bismuth, and less electronegative than tellurium or arsenic