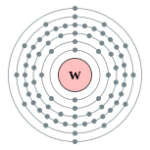 A metallic element with the atomic symbol W, atomic number 74, and atomic weight 183.85.
The name tungsten comes from the former Swedish name for the tungstate mineral scheelite, tung sten or “heavy stone”
It is used in many manufacturing applications, including increasing the hardness, toughness, and tensile strength of steel; manufacture of filaments for incandescent light bulbs; and in contact points for automotive and electrical apparatus.
Element Tungsten is many alloys have numerous applications, including incandescent light bulb filaments, X-ray tubes (as both the filament and target), electrodes in gas tungsten arc welding, superalloys, and radiation shielding. Tungsten’s hardness and high density give it military applications in penetrating projectiles. Tungsten compounds are also often used as industrial catalysts.