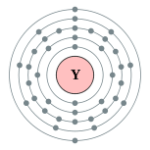 Element Yttrium is a chemical element with the symbol Y and atomic number 39. It is a silvery-metallic transition metal chemically similar to the lanthanides and has often been classified as a “rare-earth element”.
Yttrium is a soft, silver-metallic, lustrous and highly crystalline transition metal in group 3
In conjunction with other rare earths, yttrium is used as a phosphor in television receivers and is a component of the yttrium-aluminum garnet (YAG) lasers.

Yttrium isotopes are among the most common products of the nuclear fission of uranium in nuclear explosions and nuclear reactors.
In the context of nuclear waste management, the most important isotopes of yttrium are 91Y and 90Y, with half-lives of 58.51 days and 64 hours, respectively.
Though 90Y has a short half-life, it exists in secular equilibrium with its long-lived parent isotope, strontium-90 (90Sr) with a half-life of 29 years.