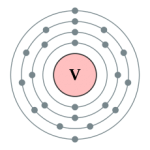 It is a chemical element with the symbol V and atomic number 23. It is a hard, silvery-grey, ductile, malleable transition metal.
The elemental metal is rarely found in nature, but once isolated artificially, the formation of an oxide layer (passivation) somewhat stabilizes the free metal against further oxidation.
Vanadium is a trace element that exists in multiple oxidation states and forms complexes with proteins.
Vanadium has not been shown to be an essential element and, indeed, is absorbed poorly. No deficiency state of vanadium has been demonstrated in humans. High doses of vanadium are toxic to animals and can cause neurologic, hematologic, renal and hepatic toxicity. Feeding of high doses to humans causes gastrointestinal upset, but vanadium has not been linked to hepatotoxicity due to dietary intake or environmental exposures in humans.
Vanadium is a compound that occurs in nature as a white-to-gray metal, and is often found as crystals.
Pure vanadium has no smell. It usually combines with other elements such as oxygen, sodium, sulfur, or chloride. Vanadium and vanadium compounds can be found in the earth’s crust and in rocks, some iron ores, and crude petroleum deposits.
Vanadium is mostly combined with other metals to make special metal mixtures called alloys. Vanadium in the form of vanadium oxide is a component in special kinds of steel that is used for automobile parts, springs, and ball bearings. Most of the vanadium used in the United States is used to make steel.
Vanadium is also mixed with iron to make important parts for aircraft engines. Small amounts of vanadium are used in making rubber, plastics, ceramics, and other chemicals.

Naturally occurring vanadium is composed of one stable isotope, 51V, and one radioactive isotope, 50V. The latter has a half-life of 1.5×1017 years and a natural abundance of 0.25%.