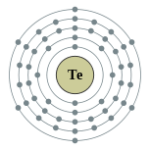 It is a chemical element with the symbol Te and atomic number 52.
It is a brittle, mildly toxic, rare, silver-white metalloid. Element Tellurium is chemically related to selenium and sulfur, all three of which are chalcogens. It is occasionally found in native form as elemental crystals.
Element Tellurium is far more common in the Universe as a whole than on Earth. Its extreme rarity in the Earth’s crust, comparable to that of platinum, is due partly its formation of a volatile hydride that caused tellurium to be lost to space as a gas during the hot nebular formation of Earth, and partly to tellurium’s low affinity for oxygen that causes it to bind preferentially to other chalcophiles in dense minerals that sink into the core.
Tellurium adopts a polymeric structure consisting of zig-zag chains of Te atoms. This gray material resists oxidation by air and is not volatile.

Tellurium has eight stable isotopes (Te-120 and Te-123 are usually considered stable because of their long half lives) and many of them have a medical application.