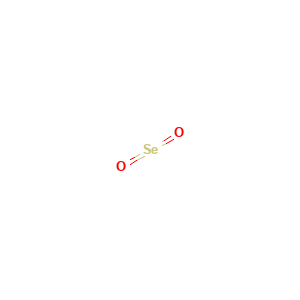 Separated from food and feedstuffs. Dry.

Decomposes on heating. This produces toxic fumes. The solution in water is a medium strong acid (selenic acid). Attacks many metals in the presence of water.

The substance is corrosive to the eyes, skin and respiratory tract. Inhalation may cause lung oedema. See Notes. The substance may cause effects on the eyes. This may result in allergic-type reaction of the eyelids (rose eye). Medical observation is indicated.

Repeated or prolonged contact may cause skin sensitization. The substance may have effects on the respiratory tract, gastrointestinal tract, central nervous system and liver. This may result in nasal irritation, persistent garlic odour, stomach pain, nervousness and liver impairment.

The symptoms of lung oedema often do not become manifest until a few hours have passed and they are aggravated by physical effort.Rest and medical observation are therefore essential.Immediate administration of an appropriate inhalation therapy by a doctor or a person authorized by him/her, should be considered.