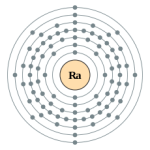 Radium atom is an alkaline earth metal atom.
Element Radium is a naturally occurring silvery-white radioactive metal that can exist in several forms called isotopes.
Radium is formed when uranium and thorium break down in the environment. Uranium and thorium are found in small amounts in most rocks and soil. Two of the main radium isotopes found in the environment are radium-226 and radium-228.
During the decay process, alpha, beta, and gamma radiation are released. Alpha particles can travel only a short distance and cannot travel through your skin.
Beta particles can penetrate through your skin, but they cannot go all the way through your body. Gamma radiation can go all the way through your body.
Radium has been used as a radiation source for treating cancer, in radiography of metals, and combined with other metals as a neutron source for research and radiation instrument calibration. Until the 1960s, radium was a component of the luminous paints used for watch and clock dials, intrument panels in airplanes, military instruments, and compasses.
A radioactive element of the alkaline earth series of metals. It has the atomic symbol Ra and atomic number 88. Radium is the product of the disintegration of URANIUM and is present in pitchblende and all ores containing uranium. It is used clinically as a source of beta and gamma-rays in radiotherapy, particularly BRACHYTHERAPY.

In the early history of the study of radioactivity, the different natural isotopes of radium were given different names. In this scheme, 223Ra was named actinium X (AcX), 224Ra thorium X (ThX), 226Ra radium (Ra), and 228Ra mesothorium 1 (MsTh1)