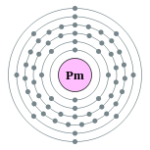 All of its isotopes are radioactive; it is extremely rare, with only about 500–600 grams naturally occurring in Earth’s crust at any given time.
Promethium is a chemical element with the symbol Pm and atomic number 61.
Promethium is one of only two radioactive elements that are followed in the periodic table by elements with stable forms, the other being technetium. Chemically, promethium is a lanthanide. Promethium shows only one stable oxidation state of +3.
The element’s atomic radius is the second largest among all the lanthanides but is only slightly greater than those of the neighboring elements
Promethium belongs to the cerium group of lanthanides and is chemically very similar to the neighboring elements

Promethium is the only lanthanide and one of only two elements among the first 83 that has no stable or long-lived (primordial) isotopes.