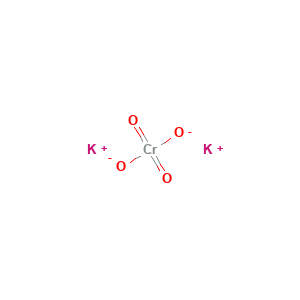 First rinse with plenty of water for at least 15 minutes, then remove contaminated clothes and rinse again. Refer for medical attention .

Inhalation causes local irritation of mucous membranes; continuing nose irritation can result in perforation of nasal septum. Ingestion may cause violent gastroenteritis, circulatory collapse, vertigo, coma, and toxic nephritis; ingestion of excessive quantities can be fatal. Contact with eyes causes severe irritation and conjunctivitis. Repeated or prolonged exposure to dust, mist, or solutions may cause dermatitis; contact with breaks in the skin may cause “chrome sores” appearing as slow-healing, hard-rimmed ulcers which leave the area vulnerable to infection. (USCG, 1999)

Behavior in Fire: May increase intensity of fire if in contact with combustible materials. Cool containers and spilled material with plenty of water. (USCG, 1999)

Personal protection: chemical protection suit including self-contained breathing apparatus. Sweep spilled substance into containers. If appropriate, moisten first to prevent dusting. Carefully collect remainder. Then store and dispose of according to local regulations. Do NOT let this chemical enter the environment.

Personal protection: chemical protection suit including self-contained breathing apparatus. Sweep spilled substance into containers. If appropriate, moisten first to prevent dusting. Carefully collect remainder. Then store and dispose of according to local regulations. Do NOT let this chemical enter the environment.

The solution in water is a weak base. The substance is a strong oxidant. It reacts with combustible and reducing materials.

Non-combustibleOxidizing agents, such as POTASSIUM CHROMATE, can react with reducing agents to generate heat and products that may be gaseous (causing pressurization of closed containers). The products may themselves be capable of further reactions (such as combustion in the air). The chemical reduction of materials in this group can be rapid or even explosive, but often requires initiation (heat, spark, catalyst, addition of a solvent). Explosive mixtures of inorganic oxidizing agents with reducing agents often persist unchanged for long periods if initiation is prevented. Such systems are typically mixtures of solids, but may involve any combination of physical states. Some inorganic oxidizing agents are salts of metals that are soluble in water; dissolution dilutes but does not nullify the oxidizing power of such materials. Organic compounds, in general, have some reducing power and can in principle react with compounds in this class. Actual reactivity varies greatly with the identity of the organic compound. Inorganic oxidizing agents can react violently with active metals, cyanides, esters, and thiocyanates.

When heated to decomposition it emits toxic fumes of /potassium oxide/.

Using potassium chromate as the source for chromium, a BCF of 1.0 (based on chromium) was determined for the whole body of Salmo gairdneri (rainbow trout) over a 30 days duration period(1). According to a classification scheme(2), this BCF range suggests that bioconcentration in aquatic organisms is low(SRC).

Do NOT take working clothes home.Rinse contaminated clothing with plenty of water because of fire hazard.Anyone who has shown symptoms of asthma due to this substance should avoid all further contact.The symptoms of asthma often do not become manifest until a few hours have passed and they are aggravated by physical effort. Rest and medical observation are therefore essential.