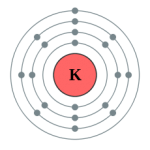 An element in the alkali group of metals with an atomic symbol K, atomic number 19, and atomic weight 39.10. It is the chief cation in the intracellular fluid of muscle and other cells.
Element Potassium ion is a strong electrolyte that plays a significant role in the regulation of fluid volume and maintenance of the WATER-ELECTROLYTE BALANCE.
Element Potassium is the major cation (positive ion) inside animal cells, while sodium is the major cation outside animal cells. The concentration differences of these charged particles causes a difference in electric potential between the inside and outside of cells, known as the membrane potential.
The balance between potassium and sodium is maintained by ion pumps in the cell membrane. The cell membrane potential created by potassium and sodium ions allows the cell generate an action potential—a “spike” of electrical discharge.
The ability of cells to produce electrical discharge is critical for body functions such as neurotransmission, muscle contraction, and heart function.
Potassium is also an essential mineral needed to regulate water balance, blood pressure and levels of acidity.

Potassium (19K) has 25 known isotopes from 33K to 57K, with unconfirmed detection of 59K.
Three isotopes occur naturally: stable 39K (93.3%) and 41K (6.7%), and the long-lived radioisotope 40K (0.012%).
Naturally occurring radioactive 40K decays to stable 40Ar (10.72% of decays) by electron capture or positron emission (giving it the longest known positron-emitter nuclide half-life). Alternately, and most of the time (89.28%), it decays to stable 40Ca by beta decay. 40K has a half-life of 1.248×109 years. The long half life of this primordial radioisotope is caused by a highly spin-forbidden transition: 40K has a nuclear spin of 4, while both of its decay daughters are even-even isotopes with spins of 0.