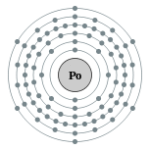 Element Polonium was discovered in 1898 by Marie and Pierre Curie, when it was extracted from the uranium ore pitchblende and identified solely by its strong radioactivity: it was the first element to be so discovered.
Polonium was named after Marie Curie’s homeland of Poland. Polonium has few applications, and those are related to its radioactivity: heaters in space probes, antistatic devices, sources of neutrons and alpha particles, and poison.
It is a radioactive element, and extremely dangerous to humans.
Polonium is a chemical element with the symbol Po and atomic number 84.

Polonium has 42 known isotopes, all of which are radioactive. They have atomic masses that range from 186 to 227 u.