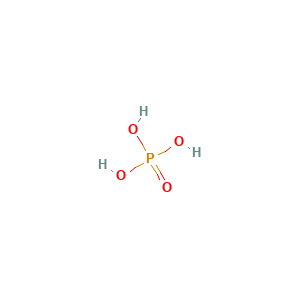 Rinse mouth. Give nothing to drink. Do NOT induce vomiting. Refer immediately for medical attention.

Personal protection: particulate filter respirator adapted to the airborne concentration of the substance. Sweep spilled substance into covered containers. Carefully collect remainder. Then wash away with plenty of water. Then store and dispose of according to local regulations.

Personal protection: particulate filter respirator adapted to the airborne concentration of the substance. Sweep spilled substance into covered containers. Carefully collect remainder. Then wash away with plenty of water. Then store and dispose of according to local regulations.

Dry. Well closed. Separated from food and feedstuffs and incompatible materials. See Chemical Dangers. Ventilation along the floor.Store in cool, dry, well-ventilated location. Separate from alkalies and most metals.

Not combustible.PHOSPHORIC ACID reacts exothermically with bases. May react with active metals, including such structural metals as aluminum and iron, to release hydrogen, a flammable gas. Can initiate the polymerization of certain classes of organic compounds. Reacts with cyanide compounds to release gaseous hydrogen cyanide. May generate flammable and/or toxic gases in contact with dithiocarbamates, isocyanates, mercaptans, nitrides, nitriles, sulfides, and strong reducing agents. Forms explosive mixture with nitromethane. Reacts violently with sodium tetrahydroborate. In the presence of chlorides can corrode stainless steel to form explosive hydrogen gas. Emits toxic and irritating fumes of oxides of phosphorus when heated to decomposition [Lewis, 3rd ed., 1993, p. 1029].

Combustion by-products include oxides of phosphorus.

The substance may have effects on the upper respiratory tract and lungs. This may result in chronic inflammation and reduced lung function . Mists of this strong inorganic acid are carcinogenic to humans. See Notes.

A harmful contamination of the air will not or will only very slowly be reached on evaporation of this substance at 20°C.

When spilled onto soil, phosphoric acid will infiltrate downward, the rate being greater with lower concentration because of reduced viscosity. … During transport through the soil, phosphoric acid will dissolve some of the soil material, in particular, carbonate-based materials. The acid will be neutralized to some degree with adsorption of the proton and phosphate ions also possible. However, significant amounts of acid will remain for transport. … /If/ reaching the groundwater table, the acid will continue to move in the direction of groundwater flow. A contaminated plume will be produced with dilution and dispersion serving to reduce the acid concentration.

UN number 1805 is used for phosphoric acid solutions.The symptoms of lung oedema often do not become manifest until a few hours have passed and they are aggravated by physical effort. Rest and medical observation are therefore essential.IARC considers mists of strong inorganic acid to be carcinogenic (group 1). However there is no information available on the carcinogenicity of other physical forms of this substance. Therefore no classification for carcinogenicity under GHS has been applied.NEVER pour water into this substance; when dissolving or diluting always add it slowly to the water.