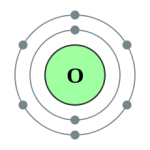 It is the chemical element with the symbol O and atomic number 8, meaning its nucleus has 8 protons.
Oxygen is a member of the chalcogen group on the periodic table, a highly reactive nonmetal, and an oxidizing agent that readily forms oxides with most elements as well as with other compounds.
Dioxygen is used in cellular respiration and many major classes of organic molecules in living organisms contain oxygen, such as proteins, nucleic acids, carbohydrates, and fats, as do the major constituent inorganic compounds of animal shells, teeth, and bone.
Oxygen was isolated by Michael Sendivogius before 1604, but it is commonly believed that the element was discovered independently by Carl Wilhelm Scheele, in Uppsala, in 1773 or earlier, and Joseph Priestley in Wiltshire, in 1774.

All three Oxygen isotopes have medical applications. O-16 is used in the production of radioactive N-13 which is used for PET imaging and myocardial perfusion. O-17 can be used as a tracer in the study of cerebral oxygen utilization. Large quantities of O-18 are used for the production of F-18.