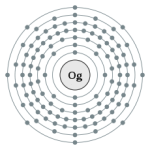 It was first synthesized in 2002 at the Joint Institute for Nuclear Research (JINR) in Dubna, near Moscow in Russia, by a joint team of Russian and American scientists.
In December 2015, it was recognized as one of four new elements by the Joint Working Party of the international scientific bodies IUPAC and IUPAP.
The name is in line with the tradition of honoring a scientist, in this case the nuclear physicist Yuri Oganessian, who has played a leading role in the discovery of the heaviest elements in the periodic table.
Oganesson is a synthetic chemical element with the symbol Og and atomic number 118.
Oganesson is a member of group 18, the zero-valence elements.
The members of this group are usually inert to most common chemical reactions (for example, combustion) because the outer valence shell is completely filled with eight electrons.
This produces a stable, minimum energy configuration in which the outer electrons are tightly bound

All isotopes with an atomic number above 101 undergo radioactive decay with half-lives of less than 30 hours.