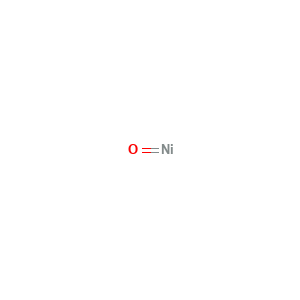 SYMPTOMS: Exposure to this compound can result in “nickel itch”, which includes skin sensitization and itching dermatitis. It may cause intestinal disorders. It may also cause irritation to the eyes, skin and upper respiratory tract. It may cause conjunctivitis. Other symptoms include asthma, epiphora and pulmonary fibrosis. Chronic exposure to this compound may result in lung and nasal cancer. It may also cause sinus and laryngeal cancer. ACUTE/CHRONIC HAZARDS: This chemical is an irritant of the skin, eyes and upper respiratory tract. When heated to decomposition it may emit toxic fumes and metal oxides. (NTP, 1992)

Basic treatment: Establish a patent airway. Suction if necessary. Watch for signs of respiratory insufficiency and assist ventilation if necessary. Administer oxygen by nonrebreather mask at 10 t0 15 L/min. Monitor for shock and treat if necessary . Monitor for pulmonary edema and treat if necessary . For eye contamination, flush eyes immediately with water. Irrigate each eye continuously with normal saline during transport . Do not use emetics. For ingestion, rinse mouth and administer 5 ml/kg up to 200 ml of water for dilution if the patient can swallow, has a strong gag reflex, and does not drool . Nickel and related compounds

Fires involving this material can be controlled with a dry chemical, carbon dioxide or Halon extinguisher. A water spray may also be used. (NTP, 1992)

Flash point data for this chemical are not available. It is probably combustible. (NTP, 1992)

Sweep spilled substance into covered containers. If appropriate, moisten first to prevent dusting. Carefully collect remainder. Then store and dispose of according to local regulations. Personal protection: particulate filter respirator adapted to the airborne concentration of the substance. Do NOT let this chemical enter the environment.

PRECAUTIONS FOR “CARCINOGENS”: A high-efficiency particulate arrestor (HEPA) or charcoal filters can be used to minimize amt of carcinogen in exhausted air ventilated safety cabinets, lab hoods, glove boxes or animal rooms … Filter housing that is designed so that used filters can be transferred into plastic bag without contaminating maintenance staff is avail commercially. Filters should be placed in plastic bags immediately after removal … The plastic bag should be sealed immediately … The sealed bag should be labelled properly … Waste liquids … should be placed or collected in proper containers for disposal. The lid should be secured & the bottles properly labelled. Once filled, bottles should be placed in plastic bag, so that outer surface … is not contaminated … The plastic bag should also be sealed & labelled. … Broken glassware … should be decontaminated by solvent extraction, by chemical destruction, or in specially designed incinerators. Chemical Carcinogens

Separated from food and feedstuffs.PRECAUTIONS FOR “CARCINOGENS”: Storage site should be as close as practicable to lab in which carcinogens are to be used, so that only small quantities required for … expt need to be carried. Carcinogens should be kept in only one section of cupboard, an explosion-proof refrigerator or freezer (depending on chemicophysical properties …) that bears appropriate label. An inventory … should be kept, showing quantity of carcinogen & date it was acquired … Facilities for dispensing … should be contiguous to storage area. Chemical Carcinogens

TLV: (inhalable fraction): 0.1 mg/m3, as TWA; A4 (not classifiable as a human carcinogen).MAK: sensitization of respiratory tract and skin (SAH); carcinogen category: 1

Use closed system or ventilation (not if powder).

Reacts violently with iodine and hydrogen sulfide. This generates fire and explosion hazard.

NICKEL OXIDE may be light-sensitive. It should be thermally stable at temperatures up to 644° F. This compound reacts violently with iodine, hydrogen sulfide and (BaO + air). It is incompatible with anilinium perchlorate and hydrogen peroxide. It incandesces in cold fluorine. (NTP, 1992).

Toxic gases and vapors (such as nickel carbonyl) may be released … in the decomp of nickel cmpd. Nickel & sol nickel cmpd

CLASSIFICATION: A; human carcinogen. BASIS FOR CLASSIFICATION: Human data in which exposure to nickel refinery dust caused lung and nasal tumors in sulfide nickel matte refinery workers in several epidemiologic studies in different countries and on animal data in which carcinomas were produced in rats by inhalation and injection. HUMAN CARCINOGENICITY DATA: Sufficient. Nickel refinery dust

The substance may be irritating to the eyes, respiratory tract and skin.

Anyone who has shown symptoms of sensitization due to this substance should avoid all further contact with nickel, nickel compounds and other metal compounds of e.g. copper, chromium and cobalt.The symptoms of asthma often do not become manifest until a few hours have passed and they are aggravated by physical effort. Rest and medical observation are therefore essential.Isolate contaminated clothing by sealing in a bag or other container.Do NOT take working clothes home.