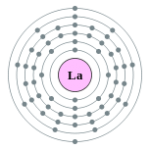 It is a chemical element with the symbol La and atomic number 57. It is a soft, ductile, silvery-white metal that tarnishes slowly when exposed to air and is soft enough to be cut with a knife.
Element Lanthanum usually occurs together with cerium and the other rare earth elements. Lanthanum was first found by the Swedish chemist Carl Gustav Mosander in 1839 as an impurity in cerium nitrate – hence the name lanthanum, from the Ancient Greek λανθάνειν (lanthanein), meaning “to lie hidden”.
Lanthanum compounds have numerous applications as catalysts, additives in glass, carbon arc lamps for studio lights and projectors, ignition elements in lighters and torches, electron cathodes, scintillators, GTAW electrodes, and other things. Lanthanum carbonate is used as a phosphate binder in cases of renal failure.

Naturally occurring lanthanum is made up of two isotopes, the stable 139La and the primordial long-lived radioisotope 138La. 139La is by far the most abundant, making up 99.910% of natural lanthanum