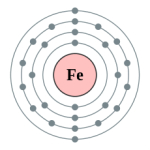 It is an element with atomic symbol Fe, atomic number 26, and atomic weight 55.85.
It is a metal, that belongs to the first transition series and group 8 of the periodic table. It is by mass the most common element on Earth, forming much of Earth’s outer and inner core. It is the fourth most common element in the Earth’s crust.
Element Iron is an essential heavy metal that is included in many over-the-counter multivitamin and mineral supplements and is used therapeutically in higher doses to treat or prevent iron deficiency anemia.
When taken at the usual recommended daily allowance or in replacement doses, iron has little or no adverse effect on the liver. In high doses and in intentional or accidental overdoses, iron causes serious toxicities, one component of which is acute liver damage.

Iron isotopes are mainly used in nutritional studies, with Fe-57 and Fe-58 being the two most commonly used Fe isotopes.
Studies have included iron-loss by human adolescents, conditions for effective iron absorption, interventions for anemia and genetic iron control. The Fe-54 isotope is used for the production of radioactive Fe-55 which in turn is used as an electron capture detector and in X-ray fluorescence.
Fe-56 can be used for the production of radioactive Co-55 which is used as a tumor seeking agent in bleomycin.