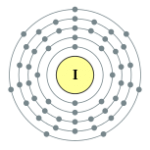 It is a chemical element with the symbol I and atomic number 53.
The heaviest of the stable halogens, it exists as a lustrous, purple-black non-metallic solid at standard conditions that melts to form a deep violet liquid at 114 degrees Celsius, and boils to a violet gas at 184 degrees Celsius.
Element Iodine was discovered by the French chemist Bernard Courtois in 1811. It was named two years later by Joseph Louis Gay-Lussac from this property
The dominant producers of iodine today are Chile and Japan. Iodine and its compounds are primarily used in nutrition.

Of the thirty-seven known isotopes of iodine, only one occurs in nature, iodine-127.
The others are radioactive and have half-lives too short to be primordial. As such, iodine is both monoisotopic and mononuclidic and its atomic weight is known to great precision, as it is a constant of nature