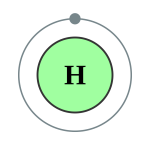 It is a chemical element with symbol H and atomic number 1. Classified as a nonmetal, hydrogenis a gas at room temperature.
With a standard atomic weight of 1.008, hydrogen is the lightest element in the periodic table. Hydrogen is the most abundant chemical substance in the Universe, constituting roughly 75% of all baryonic mass.
Hydrogen is estimated to make up more than 90% of all the atoms three quarters of the mass of the universe! This element is found in the stars, and plays an important part in powering the universe through both the proton-proton reaction and carbon-nitrogen cycle. Stellar hydrogen fusion processes release massive amounts of energy by combining hydrogens to form helium.
Hydrogen is the primary component of Jupiter and the other gas giant planets. At some depth in the planet’s interior the pressure is so great that solid molecular hydrogen is converted to solid metallic hydrogen.
In 1973, a group of Russian experimenters may have produced metallic hydrogen at a pressure of 2.8 Mbar. At the transition the density changed from 1.08 to 1.3 g/cm3. Earlier, in 1972, at Livermore, California, a group also reported on a similar experiment in which they observed a pressure-volume point centered at 2 Mbar. Predictions say that metallic hydrogen may be metastable; others have predicted it would be a superconductor at room temperature.

Hydrogen (¹H) has three naturally occurring isotopes, sometimes denoted ¹H, ²H, and ³H. The first two of these are stable, while ³H has a half-life of 12.33 years.