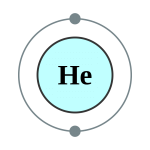 It is named for the Greek Titan of the Sun, Helios. It was first detected as an unknown, yellow spectral line signature in sunlight, during a solar eclipse in 1868 by Georges Rayet,Captain C. T. Haig,Norman R. Pogson, and Lieutenant John Herschel, and was subsequently confirmed by French astronomer, Jules Janssen.
Helium (from Greek: ἥλιος, romanized: Helios, lit. ‘Sun’) is a chemical element with the symbol He and atomic number 2.
It is a colorless, odorless, tasteless, non-toxic, inert, monatomic gas, the first in the noble gas group in the periodic table. Its boiling point is the lowest among all the elements.
Helium is the second lightest and second most abundant element in the observable universe (hydrogen is the lightest and most abundant). It is present at about 24% of the total elemental mass, which is more than 12 times the mass of all the heavier elements combined.
Its abundance is similar to this in both the Sun and in Jupiter. This is due to the very high nuclear binding energy (per nucleon) of helium-4, with respect to the next three elements after helium.

Helium has two isotopes but it consists almost entirely of He-4 with natural He only containing just over 0.0001% of He-3. Thousands of liters of He-3 are used annually in cryogenic applications and He-3 is also used as a neutron counter in nuclear application. He-3 is also applied in magnetic resonance imaging.