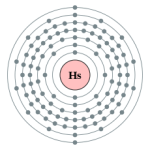 It is not known to occur in nature and has been made only in laboratories in minuscule quantities.
Hassium is a chemical element that is represented with the symbol Hs and the atomic number 108.
Hassium is highly radioactive; the most-stable known isotope 269Hs has a half-life of approximately 16 seconds.
In the periodic table of the elements, hassium is a transactinide element, a member of the 7th period and a group 8 element; it is thus the sixth member of the 6d series of transition metals.

Hassium has no stable or naturally occurring isotopes. Several radioactive isotopes have been synthesized in the laboratory, either by fusing two atoms or by observing the decay of heavier elements.