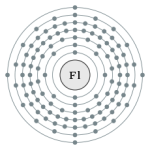 It is a superheavy artificial chemical element with the symbol Fl and atomic number 114.
It is an extremely radioactive synthetic element. The element is named after the Flerov Laboratory of Nuclear Reactions of the Joint Institute for Nuclear Research in Dubna, Russia, where the element was discovered in 1998.
The name of the laboratory, in turn, honours the Russian physicist Georgy Flyorov (Флёров in Cyrillic, hence the transliteration of “yo” to “e”). The name was adopted by IUPAC on 30 May 2012.
In the periodic table of the elements, it is a transactinide element in the p-block.
It is a member of the 7th period and is the heaviest known member of the carbon group; it is also the heaviest element whose chemistry has been investigated. Initial chemical studies performed in 2007–2008 indicated that flerovium was unexpectedly volatile for a group 14 element

In March 1999, the same team replaced the 244Pu target with a 242Pu one in order to produce other flerovium isotopes.