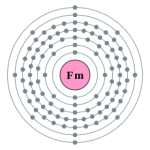 It was discovered in the debris of the first hydrogen bomb explosion in 1952, and named after Enrico Fermi, one of the pioneers of nuclear physics.
Fermium is a synthetic element with the symbol Fm and atomic number 100.
Owing to the small amounts of produced fermium and all of its isotopes having relatively short half-lives, there are currently no uses for it outside basic scientific research.
It is an actinide and the heaviest element that can be formed by neutron bombardment of lighter elements, and hence the last element that can be prepared in macroscopic quantities, although pure fermium metal has not yet been prepared
Its chemistry is typical for the late actinides, with a preponderance of the +3 oxidation state but also an accessible +2 oxidation state