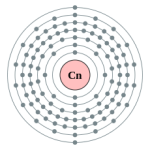 Copernicium was first created in 1996 by the GSI Helmholtz Centre for Heavy Ion Research near Darmstadt, Germany. It is named after the astronomer Nicolaus Copernicus.
Copernicium is a synthetic chemical element with the symbol Cn and atomic number 112.
Copernicium is calculated to have several properties that differ from its lighter homologues in group 12, zinc, cadmium and mercury; due to relativistic effects, it may even give up its 6d electrons instead of its 7s ones.
Copernicium has also been calculated to possibly show the oxidation state +4, while mercury shows it in only one compound of disputed existence and zinc and cadmium do not show it at all.
It has also been predicted to be more difficult to oxidize copernicium from its neutral state than the other group 12 elements, and indeed copernicium is expected to be the most noble metal on the periodic table.

Copernicium has no stable or naturally occurring isotopes. Several radioactive isotopes have been synthesized in the laboratory, either by fusing two atoms or by observing the decay of heavier elements.